The Florida Department of Environmental Protection is requiring water distribution systems to flush water mains on a regular basis. The West Melbourne Public Works Department began its water main flushing program in December 2007and will flush all city water mains every three months.

Flushing is a routine process of cleaning the distribution system piping by opening fire hydrants and letting the water flow until it runs clear. Waterlines are typically sized to provide fire flow so they are larger than what is needed for daily consumption. 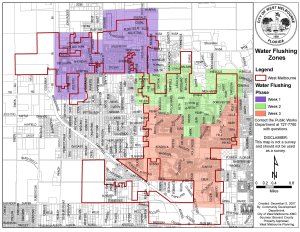 Because the pipe diameter is larger, the water flow is slow and microscopic solids can settle and accumulate in the pipes. Opening the hydrants allows the water to flow faster, releasing the accumulations on the pipe. Periodic flushing of the pipes will improve water odor, taste, and color and maintain chlorine levels.

Water customers may experience some disturbances in their service while the lines are being flushed such as a temporary decrease in water pressure or “dirty water.” There is no health risk, but it is best to avoid drinking the water until it runs clear. It is safe for showering, bathing and toilet flushing but you should avoid doing laundry if the water has a brown tint. The inconvenience will be very temporary.

The City has been divided into three zones for flushing as shown on the map. Each zone should take approximately one week to flush. Flushing will begin in the northwest quadrant of the City during week one; the central area during week two; and the southern section during week three. Flushing will be done during January, April, July and October. There may be some overlapping of effects in zones depending on the location of the open fire hydrant and the area supplied by the affected water mains. The inconvenience will be minimized by flushing during working hours when water use is lowest.